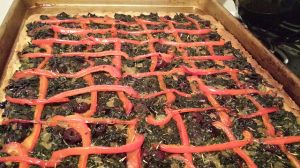 This vegan version of the Provencal tart is as savory and delicious as the classic.  The crisp pastry topped with spinach, onions, olives, and red peppers, is bursting with Mediterranean flavor.

The recipe was adapted from one that appeared in The New York Times many moons ago, which itself was adapted from Entertaining in the French Style by Roger Verge (Stewart Tabori & Chang, 1986).

Summer 2021 update:  Having made this many times over the years, I have recently fine-tuned the recipe slightly.  Bon appetit!

Line a baking sheet with parchment paper and set aside.  I usually use a 12″ x 17″ pan, but you can use two smaller baking sheets instead.

About a half hour before you are ready to assemble the pissaladière, heat the oven  to 375 degrees. 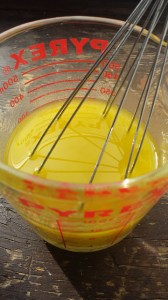 Combine the flour and 3/4 teaspoon salt in a large bowl.

In a separate bowl, combine the 1/2 cup of water and olive oil.  Beat with a fork or whisk until well combined and frothy.

Pour the oil mixture into the flour mixture and blend using your hands or a spoon, just until combined.  Do not over-work the dough.

Gather the dough into a soft ball, wrap it in plastic and refrigerate for at least two hours. 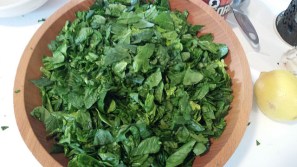 Trim the spinach leaves from the stems, rinse well, dry, coarsely chop, and set aside.

Heat 2 tablespoons of olive oil in a large pan over medium heat and add the onion.  Saute until lightly browned, about 10-15 minutes.

Add the garlic and continue cooking another two minutes until fragrant.

Add the spinach, salt, and cayenne pepper and cook for about 8 minutes, stirring frequently so that most of the moisture evaporates.

Scrape the spinach mixture into a medium small bowl and set aside to cool.

In the same frying pan, without adding additional oil, add the red pepper strips, saute until softened and set aside.

Roll out the dough into a rectangle or oval, roughly 1/4 inch thick and transfer to the parchment paper-lined baking sheet.  Use your fingers to press and stretch the dough, as needed, so it has a nice shape and fits evenly onto the baking sheet.  Roll the edges of the dough forward to form a low border.

The spinach mixture may have released additional liquid as it cooled.  If so, carefully tilt the bowl and use a spoon to drain any excess.  Too much liquid may result in a soggy crust.

Arrange the red pepper strips in a decorative pattern over the spinach.

Bake on the center rack of a preheated 375 degree oven for 30 minutes.

Check at 20 and 25 minutes to make sure the top has not overly browned.

Reduce the temperature to 350 degrees, and bake until the crust is and well browned, another 5 to 10 minutes.

Cool slightly, cut into 2 inch wedges, and serve as an hors d’oeuvre.

This entry was posted in appetizers, vegan and tagged pissaladiere, spinach. Bookmark the permalink.